Given how arduous a task it is to pass the CPA exam it’s no wonder that everyone is interested in the passage rates for it and its component sections. We’ve looked at the most recent data along with historical numbers and the results are interesting.

Average scores for each section increased slightly from 2013 – 2015 but took a slight dip in 2016 (see chart). For a long time now overall average for the sections has been around 50% and in 2016 it was just below at 48.82%. This would indicate that the difficulty of the exam has been fair and steady as each year’s candidates are reacting to it in basically the same way. What’s interesting to note is that rates for all sections dipped noticeably in 2016 which may indicate that last year’s crop of candidates was a little weak. 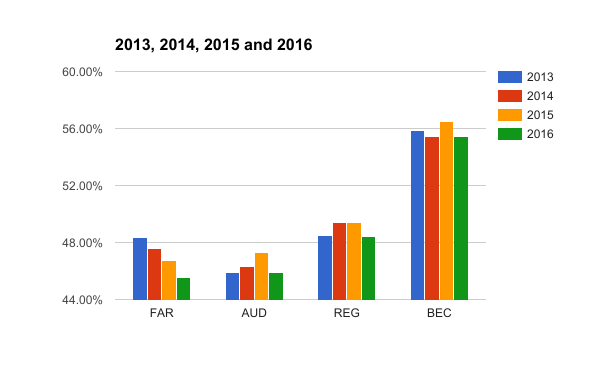 FAR is Still the Toughest and Getting Tougher

Not surprisingly, FAR is still the toughest section. This is why we dedicated a blog post to tips for CPA students on FAR. As the chart below shows, its passing rate is the only section that declined every year and it’s a steep drop at that. This would also indicate that CPA course reviews would do well to improve their materials dedicated to this section.

BEC is the Easiest…by Far. 😉

It’s notable by how wide a margin that passing rate for BEC is the leader for the exam. It’s not even close. The size of the lead begs the question of whether this section may be too easy or this area of accounting isn’t that difficult to grasp.

Like everyone else we’re interested to see how the changes this year will affect both individual sections and overall pass rates especially given what we’ve seen with FAR and BEC. Will it be tougher and lower pass rates? Will it just even out the pass rates between sections?

What is also evident is the value of CPA course reviews. If there is only a +/-50% pass rate with most people using study programs imagine what it might be without them. More proof that the CPA exam is like no other and shouldn’t be treated as such.