Understanding How the CPA Exam is Scored

As you know very well, the CPA exam is not an ordinary test. It’s definitely not like the tests you took in high school or college where you could just spend a few hours studying. Not only is it much more challenging, it’s also graded very differently. Several different factors play into determining your score.

All sections of the CPA exam are scored on a scale of 0-99 with 75 being the minimum score needed to pass. However, this score is not the percentage of questions you answered correctly.

Each section consists of multiple choice questions (MCQs) and task-based simulations (TBSs), except for BEC which has MCQs, TBSs (starting in April 2017), and written communication tasks (WCTs.) Different weight is given to different types of questions. For example, once the changes to the CPA exam go into effect in April 2017, the AUD section will have 72 MCQs which count for up to 50% of your score while 8-9 TBSs account for the other 50%. Since TBSs reflect your overall ability to handle situations and challenges you encounter on the job, they’re given more weight than MCQs.

Not all multiple choice questions are treated equally. In the MCQ sections of each section, more weight is given to harder questions. The CPA exam involves a process known as multi-stage testing. This means that for the MCQs on each section, all candidates are given three different testlets and the testlets contain questions classified as either “medium” or “difficult.” Which testlet you receive depends on how well you do on the previous one. Every candidate starts out with a medium level testlet and if a candidate does very well on that first testlet, their second testlet will be a difficult one. The third testlet is based on their overall performance on the second testlet. 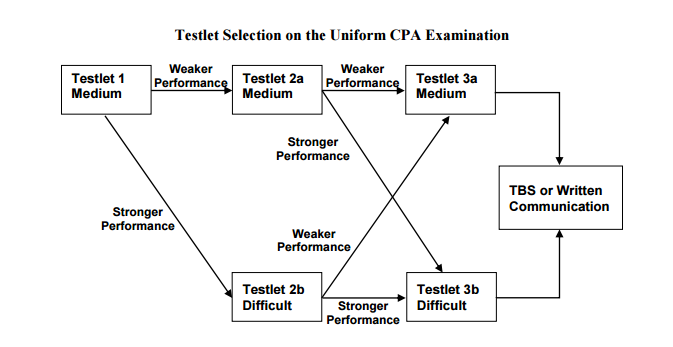 Difficult questions are given more weight than medium questions, so in theory, you could potentially earn a higher score by answering fewer difficult MCQs correctly than you could by answering more medium level MCQs.

Like every other type of question on the CPA exam, written response questions are graded by computer. The program used to grade written responses is designed to look for the same sorts of things a human grader would look for. If your score is very close to a 75, your written response will automatically be reviewed by a human reviewer to make sure it is accurate.